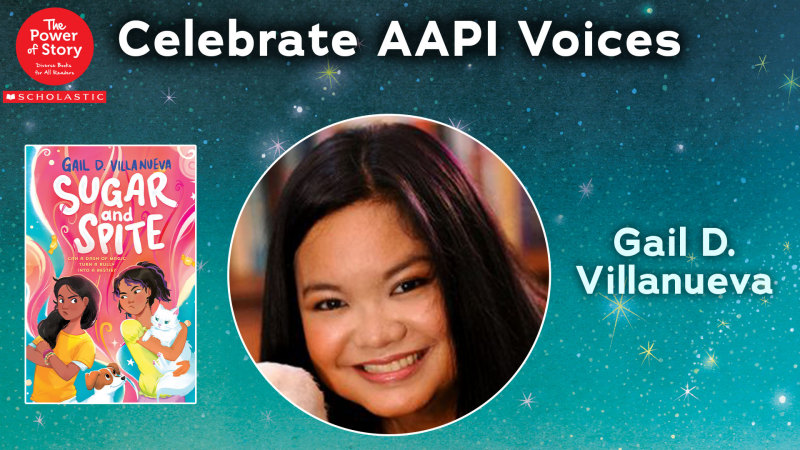 We are thrilled to celebrate Asian American Pacific Islander Heritage Month with a special On Our Minds blog series featuring four of our AAPI authors and illustrators. We asked each one to reflect on how their identity and/or culture influences and is visible in their creative work. The second post in this series of blog posts celebrating AAPI voices is by Gail D. Villanueva. Her latest book, Sugar and Spite, is available now!

Filipino culture is a complex thing. It’s so diverse that it’s hard to pin down, influenced not only by its trading history and past colonizers, but also by its native customs and heritage that live on to this day. The integration of Western, Asian, and local practices makes the Philippines—from its art, history, and cuisine to its laws, customs, and beliefs—a beautiful melting pot of different identities.

Unfortunately, when you live in a world that’s rooted in oppression and believes whiteness is the norm, it’s not so easy to have such a rich culture. Stereotyping and discrimination have made it so that when someone says, “Asian,” Filipinos aren’t the first ones to come to mind. We’re usually forgotten or ignored, even in Asian spaces. We become invisible.

I’ve been asked why I have a Hebrew first name. I’ve been “praised” for speaking English so well. I’ve been spoken to in Spanish because of my Hispanic surname. I’ve been told I’m “too dark to be Asian.” My Filipino identity felt erased, so I often wondered where I stand as a brown Asian who isn’t quite “the Asian” other people expect Asians to be.

Even now, a Filipino making waves in the international scene is a cause for a huge celebration. We literally have local news segments where the anchorperson would proudly declare, “So-And-So is Filipino!” Don’t get me wrong. There’s totally nothing wrong with Filipino pride. But it makes me sad. Because that means the world hardly knows about us, and we have to cling on desperately to every little representation we have.

As a kid, I rarely saw Filipinos in books, films, or TV shows outside the Philippines. It gave me the impression that we didn’t exist to people other than ourselves. I lived through my younger years believing that being a Filipino—specifically, a brown Asian—makes me less than people from richer countries and those who have lighter or white skin.

Colorism and colonial mentality take a while to unlearn. I had to become an adult and revisit Philippine history to understand how they came to be. I had to unpack my own biases and learn to believe in myself—that I’m as good as my lighter-skinned contemporaries, that I have stories worth telling the world.

I started my publishing journey in a place where I wasn’t sure I was welcome as a brown Filipino writer in global spaces, but I trudged on. I didn’t want kids like me to wait until they’re adults to learn that they matter, and that they are every bit as beautiful. Besides, I promised myself I’ll do my best for Filipino readers to see themselves in every book I write, so they won’t feel lonely and forgotten the way I did reading as a child.

Sugar and Spite is the second book I’ve authored, but it’s the first one I’ve written with an all-Filipino cast. It’s set in a fictional island in modern-day Philippines, and tells the story of 11-year-old Jolina Bagayan, who is training to be an arbularyo—a faith healer. She brews a forbidden gayuma (a powerful love potion) and gives it to the girl bullying her. But this kind of magic has consequences, and it’ll come for Jolina in the midst of a terrible storm.

Although anyone can relate to Jolina’s struggles with a bully, I stayed true to my promise and made Sugar and Spite unapologetically Filipino. I guess I just wanted to show kids like me everywhere that we can be heroes too. Filipinos don’t have to be culturally ambiguous sidekicks all the time. We can be awkward loners failing at making friends with the new kid in town. We can be potion-makers trying to teach bullies a lesson on how to be kind. We can be magic.

Because of the power of story, we can be anyone we want to be. I’m eternally grateful to be able to play a part (even just a teeny, tiny part) in showing the world, through my words, that Filipinos don’t have to be invisible. We are here, and we’re here to stay.

Gail D. Villanueva’s debut novel, My Fate According to the Butterfly, was named a Best Book ofthe Year by Kirkus Reviews, an Amazon Best Book of the Month Editor’s Pick, and a NCSS-CBC Notable Social Studies Trade Book for Young People. Born and based in the Philippines, Gail’s daily routine includes running a web design company with her husband while trying to keep up with the shenanigans of their many pets—dogs, ducks, turtles, cats, and random birds they befriend in the backyard. Learn more at www.gaildvillanueva.com.