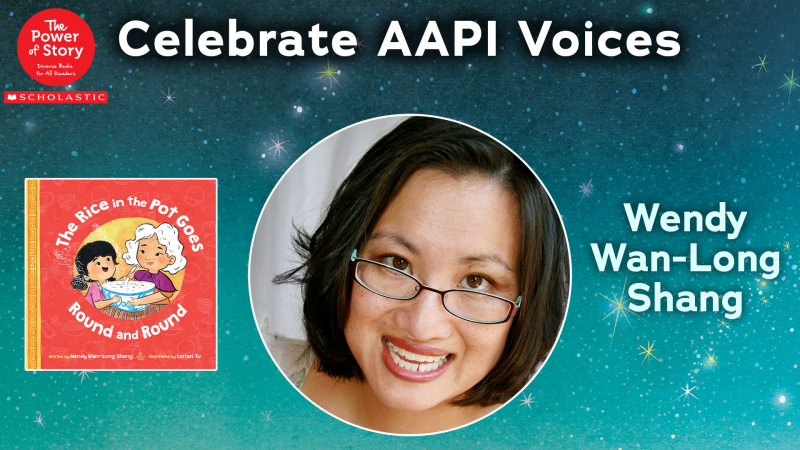 We are thrilled to celebrate Asian American Pacific Islander Heritage Month with a special On Our Minds blog series featuring four of our AAPI authors and illustrators. We asked each one to reflect on how their identity and/or culture influences and is visible in their creative work. The first post in this series of blog posts celebrating AAPI voices is by Wendy Wan-Long Shang. Her latest book, The Rice in the Pot Goes Round and Round, is available June 1!

I grew up in the 70s and 80s, which meant that Asian people usually appeared on TV as side characters. Mr. Sulu from Star Trek. Arnold’s teacher from Diff’rent Strokes. The very occasional Korean person appearing in M*A*S*H* even though the whole show was set...in Korea. I was grateful for these morsels. Call it side character syndrome. The effects of this syndrome were redoubled by the ethic exemplified by many immigrant parents at the time, including my own. Put your head down and work hard. Don’t cause trouble, make a fuss or call attention to yourself.

I remember the first time I found books and movies with Chinese women at the center, in my early twenties. When my mom took me to Disney World, I rushed back to the hotel at the end of every day to re-enter Bette Bao Lord’s world in Spring Moon, a decades-spanning novel reflecting the modern history of China. When I went off to the so-called Love Boat program in Taiwan - a program to bring young people of Chinese heritage together from around the world - nearly every young woman there had Amy Tan’s Joy Luck Club in hand. In the basement theatre of Newcomb Hall at the University of Virginia, I saw Gong Li debut in Red Sorghum.

The characters were revelatory to me in multiple ways. At a time when blonde hair and blue eyes defined the standard of desirability, seeing Gong Li’s face flit across the screen finally affirmed to me the beauty of my own people. I heard echoes of stories that had been told to me by my own family of surviving World War II, and found strength and recognition in our shared gutsiness, resourcefulness and sacrifice. Most importantly, though, was that after seeing Chinese people as side characters all my life, I finally was able to enjoy fully-realized women taking charge of their own lives, experiencing love and loss, and possessing a way of looking at the world that made sense to me.

When children ask me why I wrote my first book, The Great Wall of Lucy Wu, I tell them very honestly that it is the book I wanted as a child. Without knowing the exact words for what I was missing, I craved recognition of my experiences and reflection of my being. So now I create those stories. Sometimes it is the complex ache of microaggressions from someone you love, as experienced by Lauren in Not Your All-American Girl. Other times it is the simple joy of a family dinner, inspired by a Thanksgiving meal at a table with a lazy susan at the center, shown in The Rice in the Pot Goes Round and Round.

As I write this, it has been only a few short weeks since six Asian women and two other victims were murdered in a mass shooting in Atlanta, part of a rising tide of violence against Asian and Pacific Islanders, particularly women. It is a distressing, bewildering feeling, to go out into a once-familiar (and safe-seeming) world and begin to wonder who is trustworthy, and who is not. I wonder what it will take to change this trajectory of hatred. Many of our responses, while worthwhile, deal with attacks, either in the offing or afterward. How can we prevent them in the first place?

One of the many powers of story is to imagine the ending, and constructing the events it will take to get there. I still believe in the truest promise of the United States, where all people can live together, without fear and the opportunity to exert their full potential. So I put my head down, not to evade notice, but to write. Research tells us that one of the best forms of combating racism is to give children both the tools to discuss and think about race, and to develop empathy for others. Books for children at every age give us that opportunity. My books are a work of love, my contribution to the ending that I believe in. That is the power of story.

Wendy Wan-Long Shang is the author of The Great Wall of Lucy Wu, which was awarded the Asian/Pacific American Award for Children's Literature; The Way Home Looks Now, an Amelia Bloomer Project List selection and a CCBC Choices List selection; and This Is Just a Test, which she cowrote with Madelyn Rosenberg and which is a Sydney Taylor Honor Book. She lives with her family in the suburbs of Washington, D.C.