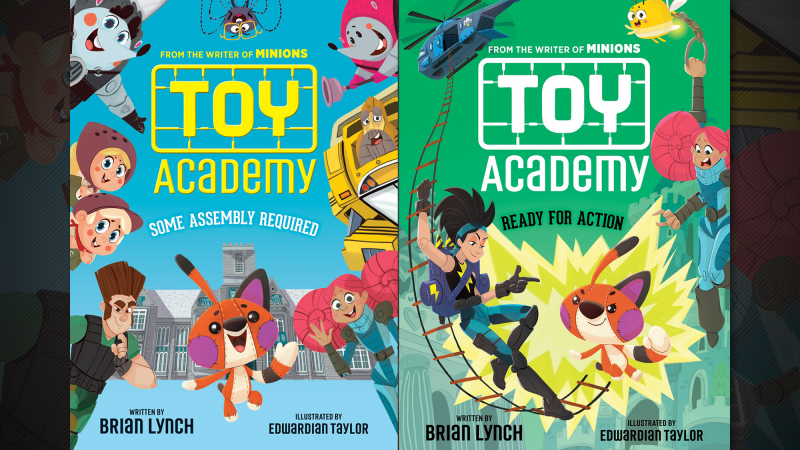 The best writing tips from the writer of Minions, The Secret Life of Pets, and the Toy Academy series

I’ve been writing family movies, including Minions and The Secret Life of Pets, for over a decade now, which is probably longer than half of my core audience has been alive. But when I came up with the idea for Toy Academy, I thought writing this story as a book instead seemed like a better fit. I could really get into the lead character’s cotton-stuffed head. We could know why Grumbolt, that hastily made, mismatched doll, wantedto be a toy. Why he wanted a kid to call his own. What his fears and insecurities were.

So even though I had much more experience writing movies, I took the plunge and wrote Grumbolt’s story as a book. Luckily for me, I could use a lot of what I had learned writing screenplays and apply it to writing Toy Academy: Some Assembly Required and its follow-up Toy Academy: Ready for Action.

I’m happy to share some of the writing lessons that I learned as a screenwriter, and how they helped me write my books for kids.

I learned pretty early on that you have to remember your audience. In family movies, that means writing for every member of the family. Kids, adults, teenagers, hopefully everyone’s gonna see your movie and you don’t want anyone to be bored.

That’s not to say every joke has to be universally loved by every age, but there should be something in each scene for everyone to enjoy. When we watched test screenings of Minions (where you recruit an unpaid audience to sit and watch a rough cut of your movie), we made sure we were getting steady laughs from everyone in the audience. At the end of the movie, we had everyone fill out cards saying what they liked, what they didn’t, and we read each and every one. Kids usually like anything with Bob (the smallest cutest Minion). Adults loved the period comedy (it took place in the '60s) and the more subversive humor. Teens loved the action, violence, and sure, flatulence. EVERYONE loved the slapstick.

When writing Toy Academy, it was always in the back of my head that a parent might be reading the book with their kid. I wanted to make sure there’d be something for kids and parents in every chapter. (As the parent of a four-year-old, I knew what it was like to be stuck reading the same book over and over.) So, in addition to the humor and adventure for kids, you might notice the more adult puns and allusions in the chapter titles. Or that the toys Grumbolt meets at Toy Academy are based on toy lines from every generation.

Writing movies has also taught me to show and not tell. Yes, you can have a character say they’re mad, but it’s so much more fun and interesting to SHOW them being mad. Finding a new, exciting, visual way to express it. This lesson carried over to writing Toy Academy as well. I would write entire paragraphs about how Grumbolt was feeling, and then realize one well-written sentence, one line of dialogue, one mention of a facial expression, could convey that so much better, and keep things moving. Also, I quickly realized that the beautiful illustrations from Edwardian Taylor could do a lot of the heavy lifting. Why describe how cool a giant castle playset is when Edwardian could simply DRAW something that reader can behold. Why talk about the sprawling metroplex known as Toy World, when we could have a two-page map SHOWING the incredible town the toys called home?

Another thing you have to remember when writing a movie for all ages is keep it simple. Figure out the story you’re telling and have everything else serve that. Now this seems like a no-brainer but you’d be surprised: As a writer, when you’re enjoying a performance in a movie or a joke is really working, there’s always a temptation to keep going with it. Take a side road and just be funny for a while. When I was working on the original The Secret Life of Pets, it was jam-packed with really funny actors and comedians playing all sorts of animals. We thought maybe there was a way to get some more laughs out of Sweetpea, a tiny bird who hangs out with the group. Up until that point, Sweetpea talked in chirps and coos, the logic being dogs and cats can’t understand bird-talk. But we gave it a try, adding another voice to the mix and having Sweetpea jump in on the fun, even getting into his own side-story. There was funny stuff, for sure, including a running gag of Sweetpea seeing his reflection and thinking it was a rival bird. We even had a hugely funny, incredibly talented actor come in and record his lines.

But at the end of the day, it was too many voices. It was too distracting. And Sweetpea went back to chirps and coos.

When writing Toy Academy, the first draft was double the length of the book that was eventually released. That was because the first draft was for indulging every possibility, trying out every joke, introducing every character. And then, my editor Emily and I would re-read, and we’d figure out what was a distraction from the story we were trying to tell. It would always kind of hurt to cut really funny stuff, but (a) there was enough funny stuff, the book is really funny, you should read it and (b) if it was THAT good an idea it could go into the next Toy Academy book.

One “character” that has been cut from both Toy Academy books for this very reason has been Magic 8 Ball, a plastic ball that “predicts the future” by displaying one of six pre-written declarations (“OUTLOOK NOT SO GOOD!” “ASK AGAIN LATER”). All the toys consider this non-speaking plastic ball a great and powerful oracle. It made for a few funny scenes, but it didn’t serve the story or the message, so out it went.

Lesson #4: Have something to say

Speaking of the message.

The most important lesson writing family movies has taught me was have something to say.

You could have the funniest scenes, the most intense sequences, the greatest characters but none of that matters if you don’t have a reason for telling the story. A message or a point of view that you want to express. With my most recent movie, The Secret Life of Pets 2, everyone working on it was excited about the prospect of doing a movie about pets and their relationship to children. But it wasn’t until we landed on what we wanted to talk about that things started clicking. Having kids is great, it’s the best, but it also makes you scared of everything. You fear for your kid’s safety 24/7. But you can’t let that fear run your life. As the director Chris Renaud said, “It’s a scary world but you have to live in it.” We want the best for our kids, and we have to get over our fears to give it to them.

Once we landed on that, everything fell into place.

And what happened next was incredible. At the end of the first test screening, we saw parents sniffling, hugging their kids. They saw themselves in the character of Max, who so loves his little boy that it turns his world upside down. They identified with him when he got scared for the kid, and they were relieved and emotional when Max faced his own fears and helped his kid lead his best life.

Finding that message was equally as important when I was writing Toy Academy. I had the idea of a “school for toys” for a long time. But I didn’t start writing it until I realized what I wanted to say with it. Once I started thinking about the lead character, a stuffed animal who doesn’t know what kind of animal he’s supposed to be, it all came together. Growing up, I was worried I didn’t have the answers to everything. This book basically says “it’s okay to not know.” Grumbolt doesn’t know who he is yet, and that’s fine. The second book has a message about how it’s okay to be scared. Now, these messages are surrounded by savage teddy bears and evil action figures and wise-cracking robots, so kids don’t feel hit over the head with the message. But hopefully it clicks with a few readers and helps them with whatever they’re going through. I’ve gotten more than a few emails from parents talking about how their kid saw themselves in Grumbolt, and I can’t ask for a better reaction than that.

Hopefully you’ve enjoyed this peek into the process. And by the way, not only has writing movies helped me write books, the reverse is true. I’m a much better screenwriter since beginning my time with Toy Academy.

Learn more about the Toy Academy series (and get your copies) here!

Brian Lynch is the writer of the blockbuster films Minions (2015) and The Secret Life of Pets (2016). He has also written several comic books and graphic novels, including ANGEL: After the Fall with Joss Whedon, and SPIKE, which debuted at #1 on The New York Times Graphic Novel bestseller list. A native of New Jersey, Lynch currently lives in Los Angeles with his family, including his two-and-a-half-year-old son Henry. You can find him at @BrianLynch.