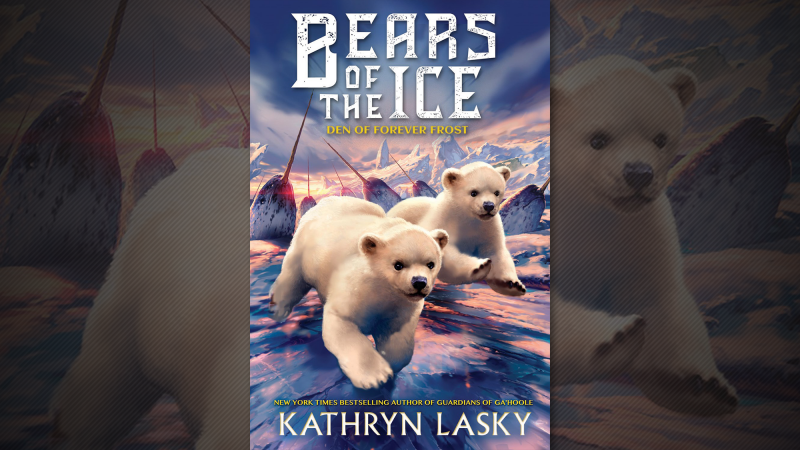 Bears of the Ice and the Great Melting

Guest blog post by Kathryn Lasky, author of the Bears of the Ice series

On October 9, the day my newest book Bears of the Ice: The Den of Forever Frost was published, the Washington Post ran a headline that read: “The world has barely a decade to avoid disaster. We need to combat climate change — now.” When I first began working on this fantasy series nine years ago, making notes for a story about polar bears threatened by a deadly flood, I never anticipated that global warming would accelerate with such alarming speed.

Bears of the Ice is a blend of fact and fiction; I love taking real animal behaviors and adding a fantastical spin. The fact that owls fly silently inspired the owl armies in Guardians of Ga’Hoole. The captivatingly complex wolf hierarchies provided the basis for Wolves of the Beyond. With this new series, the setting came first—I was fascinated by polar bears’ isolation and their dependence on the rapidly vanishing sea ice.

Bears of the Ice follows cubs Stellan and Jytte on a treacherous journey to rescue their mother who’s been imprisoned at the sinister Ice Clock, the headquarters of the Grand Patek whose dangerous influence is spreading throughout the bear kingdom.

The setting for these book is the high Arctic, or the Nunquivik as I call it. To create this imaginary land I went to the real polar bear habitat—specifically, Churchill, Manitoba in Canada.  My husband and I traveled across the tundra in a large bus called a Tundra Rover and then flew out over the sea ice of Hudson Bay in a helicopter. We went in early November when the polar bears were just setting out on the ice. I saw their land dens and their ice refuges amidst the jumbled blocks of ice where mother bears would huddle with their cubs. I was fascinated by the ice itself that was sculpted by the wind and sea, and rears into fabulous configurations.

Yet the beauty of the landscape was tempered by a sense of unease as our guides explained how global warming has led to the shrinking of the sea ice mass. The statistics are sobering: the sea ice has diminished by millions of square miles in just a few years. The sea ice is where polar bears hunt for seals, and as the ice vanishes, the bears are forced to swim vast distances to find food. By the year 2050 the population of polar bears will have diminished by a third. In 2008, just a few years before our trip, polar bears were added to the endangered species list.

Humans rarely play a role in my fantasy series. Like Wolves of the Beyond and Guardians of Ga’Hoole, Bears of the Ice takes place in a post-human world thousands of years from now. I did not set out to write a tirade on global warming. But as I began my research on polar bears, I realized I would be remiss if I didn’t incorporate the greatest threat facing this species. The “Great Melting” that threatens my characters is fantastical but it’s also a metaphor for what’s happening now. There is so much power in fantasy and sometimes we need fantasy not to escape reality but to find it.