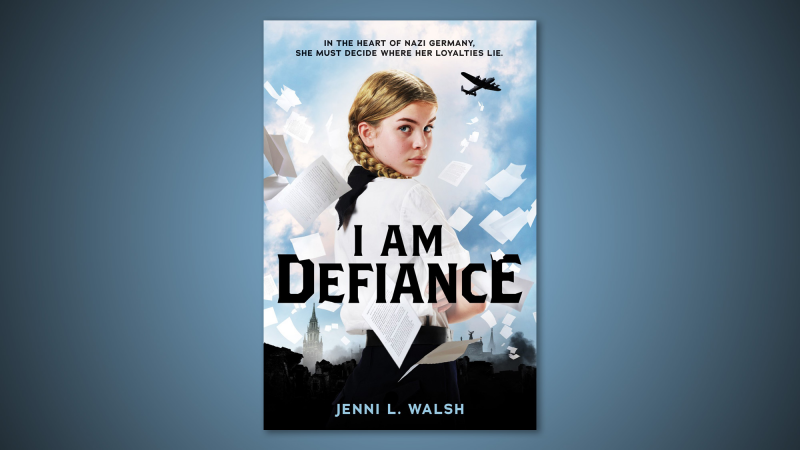 Author Jenni L. Walsh on Taking a Stand for Kindness and Good

This is a guest post from I Am Defiance author Jenni L. Walsh.

I live in a neighborhood plentiful with elementary and middle-school children. At the onset of the pandemic, a group of families quarantined as a neighborhood, allowing our children to freely play throughout the spring and summer months, swimming, biking, barbequing, celebrating birthdays and holidays, and playing with their friends. For months, we were fortunate to live in a carefully constructed bubble. My young children understood that there was a virus and they had the sense of its danger, but they’d run from our house and down the street to meet their friends without a real care in the world.

I couldn’t help seeing a parallel to the main character in my World War II novel I Am Defiance. Brigitte is German. She was only three when Adolf Hitler came to power. Only three when books were banned and burned. Only eight when Kristallnacht occurred. For nothing more than being born “racially pure,” twelve-year-old Brigitte holds only a blurry, second-hand understanding of what has happened and what is ongoing in her country. For Brigitte, her world is spent with friends, playing soccer, camping, hiking, and gossiping at her League of German Girl meetings. Brigitte is taught that Jewish people are the enemy. However, with less than five thousand Jews remaining in her populous city of München, these lessons are not put into practice and easily put out of mind. Because she happens to be in Hitler’s favor—and because Hitler initially hid his acts of persecution—Brigitte is unaware of the existence of concentration camps, let alone that one is located only ten miles north of where she lives. She very much lives in her own bubble, mostly shielded from the atrocities of the war and how others suffered because of Adolf Hitler’s tyranny.

Then, Brigitte’s bubble bursts. Her sister Angelika contracts polio, and her family must hide Angelika’s resulting disability for fear of the Nazi Party rejecting Angelika from their master race. Germany begins to be bombed, unleashing a fear in Brigitte she’s never known before. A friend from the League of German Girls, who Brigitte thought had been nothing but loyal to the Nazi Party, is accused of defying Hitler—and vanishes. And, a real-life youth resistance group, known as the White Rose, begins a pamphlet campaign to educate Germans on the truths of the war and of the persecution of Jews. Brigitte’s eyes are opened to a very different world than she’s been taught to believe.

How will Brigitte react? What will she do? Those questions are why I was drawn to writing I Am Defiance. I am eager for children to see how Brigitte grows and responds to racism, propaganda, and hatred. We know as our children age, they will experience new people, new thoughts, and new situations, expanding the bubbles in which they live. As we’ll hopefully return to a non-virtual world in the coming months, our children may be thrust into situations where they’ll need to make decisions on how to act. I hope they’ll be inspired to take a stand for kindness and good, just as Brigitte does as she dangerously defies the Nazis.

Click here to start reading I Am Defiance and order your copy today.