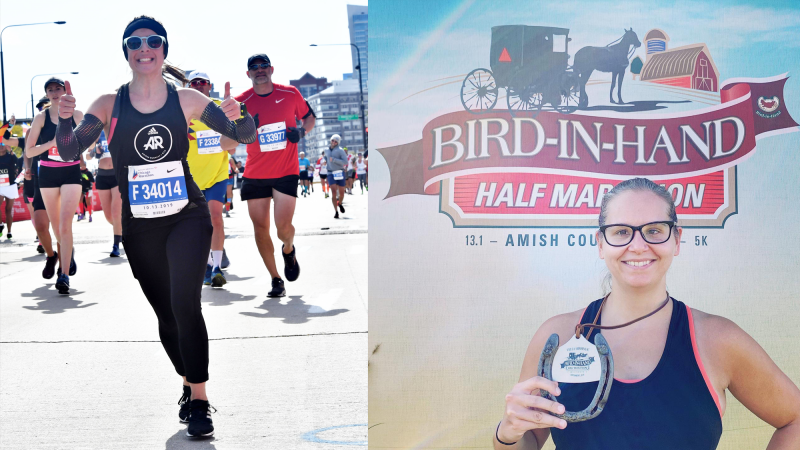 Audiobooks for all runners

Autumn is the best season for a number of reasons, including (but not limited to) Thanksgiving, Halloween, sweaters, gaining an hour of sleep, pies, and annual return of pumpkin spice lattes (if that’s your thing). But for some specific people, there’s another reason to love fall: running season!

While it’s totally possible to run during any season, the crisp, cool air of autumn is the thing PRs (personal records) are made of. The legendary Chicago and New York City Marathons take place in October and November, and fall foliage helps make for the perfect background when you pose with your finisher’s medal.

We have a few runners on staff here at Scholastic in New York City (myself included), and we all listen to different things while we run, including music, podcasts, and of course, audiobooks! To help our bookworms who may also be runners get through this running season, we’ve pulled together audiobook recommendations inspired by some of our PRs, and the stories behind them!

I ran the NYC Runs Brooklyn Half Marathon this year. My time was 2:15. I was thrilled, it was exactly the time I had hoped for. It was my first organized race in two years and I was elated that I did so well. During the 2017 NYC marathon I tripped on the Queensboro Bridge and cracked a tiny bone in my ankle. I had to pull out of the race at mile 17 and I was utterly heartbroken. The following summer, I ran too much without resting and I tore a tendon in my ankle. That injury required me to pull out of the 2018 marathon. It has been a long road since 2017 and 2018. I got a trainer for this year’s races and I am currently the fastest and strongest I’ve ever been. The Brooklyn Half Marathon was my first time running in a race again and it was harder than I thought - there were so many hills. It still ended perfectly and I am even more prepared for the New York City Marathon in t-minus 12 days.

If you can run a half marathon in 2 hours and 15 minutes like Chelsea, we recommend: I ran the Bird-in-Hand Half Marathon in Amish Country, PA this year. My goal was a 10 minute pace, and I came up a little short with a 2:24 finish. I was still super proud, though – earlier this year when I started running seriously I never thought I’d be able to finish a half just a few months later. The course was very hilly which I didn’t realize (be sure check out elevation maps ahead of time!), but the beautiful views of the Amish farms distracted me. And the finisher medal was a real horseshoe!

If you can run a half marathon in 2 hours and 24 minutes like me, we recommend: I ran the Chicago Marathon this year. Chicago is famous for being a flat, fast course, and with three other marathons under my belt, I was set on breaking four hours. I dedicated so much time and effort to my running plan, and trained with a fantastic group (shout out to Adidas Runners NYC!) that pushed me beyond my limits each week. I steadily became a faster, stronger runner, and was feeling confident leading up to race day. And then, five days before the marathon, disaster struck. I got the flu. With three days to go, my doctor told me I shouldn’t run. That Friday afternoon I flew to Chicago, still uncertain about my participation, but by Friday night my mind was made up. I was running this thing. Sunday morning I arrived at the start feeling good, but definitely nervous. But I trusted my training, and put my faith in the adrenaline, the cheering crowds, and my own determination to get me to the finish line. And it paid off! I didn’t break four hours like I had wanted, but I did still manage to PR by four minutes, and I had a blast doing it. Considering I managed that while recovering from the flu, I take that as a big win! Next year Gina and I are going to run a marathon together, and we can’t wait! (Editor's Note: This is unconfirmed.)

If you can run a marathon in 4 hours and 7 minutes like Allyson, we recommend: Something else to consider is that training for half and full marathons takes up a lot of time. As Chelsea, Allyson and I can attest, 10 and 20 mile runs on the weekend are part of the deal! Below are some audiobooks we recommend to listen to over the course of your training schedule.