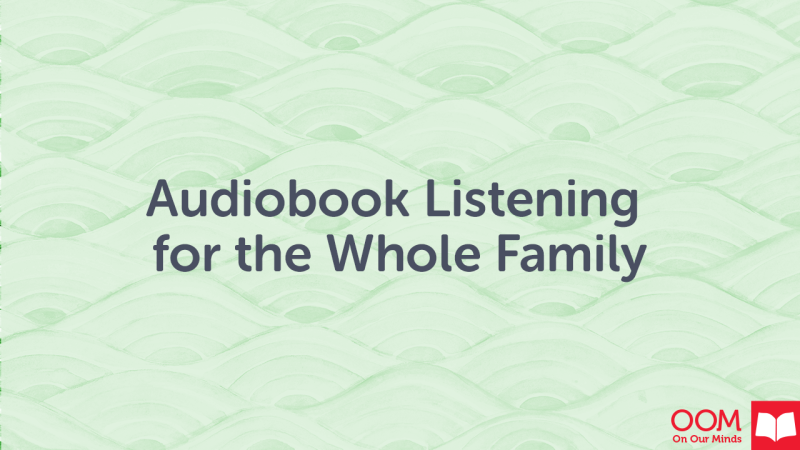 Audiobook Listening for the Whole Family

June is Audiobook Month! Audiobooks are awesome because you can listen to them anywhere and any time. Listen in and check out this list of audiobooks for the whole family, for ages 0 and up. 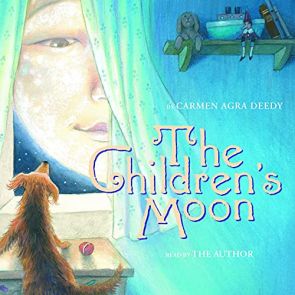 There once was a time when the sun alone ruled the day, the moon graced the night, and little children were sent to bed before sunset. Then early one dawn, the moon heard sounds of children laughing, and she yearned to see them by daylight. "Certainly not!" snapped the sun. "The day is mine. The night is yours!" But the moon had a clever plan.... Carmen Agra Deedy and Jim LaMarche have brilliantly crafted an original pourquoi tale about finding one's place in the universe. 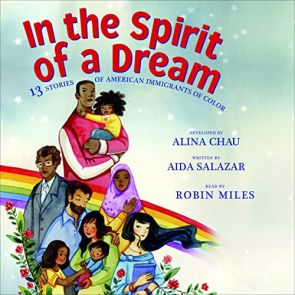 In the Spirit of a Dream: 13 Stories of American Immigrants of Color

In the spirit of a dream, many immigrants of color set out across continents, oceans, and borders, travelling to the United States in pursuit of opportunity. This audiobook is a celebration of 13 American immigrants of color, from world-famous to local heroes, politicians, surgeons, athletes, activists and more. 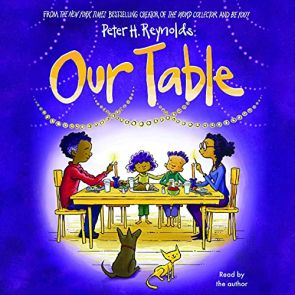 Violet longs for the time when her family was connected: before life, distractions, and technology pulled them all away from each other. They used to gather at the table, with food and love, to make memories, share their lives, and revel in time spent together. 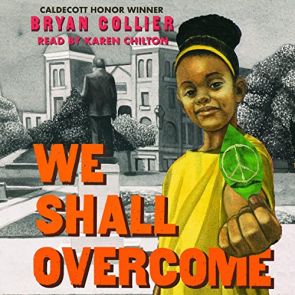 "We shall overcome" is one of the most recognizable anthems of the civil rights movement, widely performed at protests and rallies to promote nonviolent civil rights activism. Now, these inspirational, empowering, legendary lyrics are brought to life by multi-award-winning talent Bryan Collier. Powerfully imagined for the present moment, Collier melds the most emblematic moments of the 20th-century civil rights movement with the present day, depicting the movements, protests, and demonstrations - big and small - as the fight for justice continues. Full of depth, tenderness, and expression, and offering historical context while remaining powerfully relevant to the present day, this impactful audiobook is a must-have for every home and classroom. 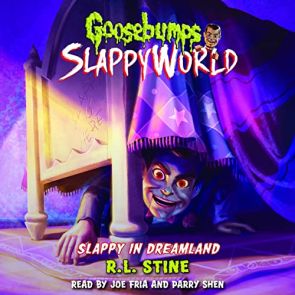 Richard Hsieh's life is about to become a total nightmare. His dad studies dreams and they hook his new Slappy doll up to the dream machine as a joke. All of a sudden, Richard's dreams are becoming scarier and scarier. Each time, seeing Slappy, his birthday present, come to life and wreak havoc. But they're only dreams, right? When his cousin Willow comes to spend a few days with him, she, too, begins to dream of Slappy. It's impossible! But when Slappy threatens to invade more kids' dreams, they’ll have to figure out how to defeat him before he becomes a dream master. 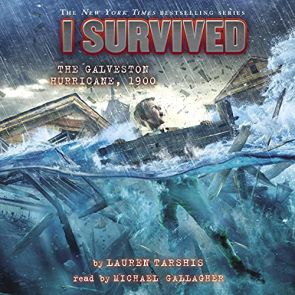 I Survived the Galveston Hurricane, 1900

The city of Galveston, Texas, was booming. Perched on an island off the southern coast of Texas, Galveston had been founded in the 1830s. By 1900, it was Texas's richest and most important city. Boats loaded up with American cotton and wheat steamed from Galveston to countries around the world. Arriving ships were crowded with immigrants. The streets, paved with crushed oyster shells, sparkled like they'd been sprinkled with diamonds. True, this glittering city was prone to flooding. But just a few years before, a weather forecaster had said the idea of a hurricane striking Galveston was absurd. So when a storm started brewing on September 8, 1900, no one believed it would be any worse than previous storms. They gathered on the beach to cheer on the wild waves. But what started as entertainment soon turned into a nightmare as those wild waves crashed into the city. By morning, hundreds of homes were destroyed. Eight thousand people were dead. The city had all but disappeared. 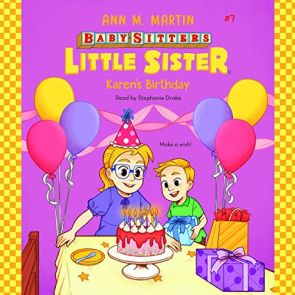 It's Karen's birthday! She can't wait for all those presents. Karen is even having two parties — one at Daddy's house and one at Mommy's. But what Karen really wants for her birthday is one party, with her whole family together. 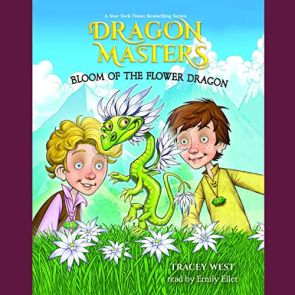 Bloom of the Flower Dragon

A Flower Dragon named Wildroot has come to Bracken! He needs help because his home is in danger. The Dragon Masters must find this small dragon his own Dragon Master. The Dragon Stone reveals a boy named Oskar, who is disappointed that he does not have a big, fire-breathing dragon. Can Oskar and his dragon learn to work together in time to save the Flower Dragons from a terrible monster? 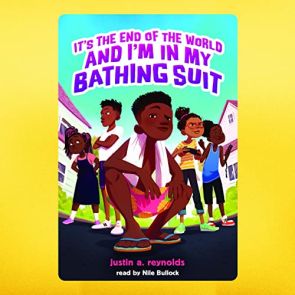 Written by Justin A. Reynolds, narrated by Nile Bullock

Twelve-year-old Eddie Gordon Holloway has concocted his most genius plan ever to avoid chores... especially the dreaded L-A-UN- D-R-Y. If he can wear all the clothes he owns, he'll only have to do the laundry once during his school break. On the day of the highly anticipated Beach Bash, Eddie's monstrous pile of dirty laundry is found by his mom. And Eddie's day has just taken a turn for the worst. Now he's stuck at home by himself, missing the bash, and doing his whole pile of laundry. But midcycle, the power goes out! With his first load of laundry wet and the rest of his stuff still filthy, he sets out to explore the seemingly empty neighborhood in his glow-in-the-dark swim trunks, flip-flops, and a beach towel. He soon meets up with other neighborhood kids: newcomer Xavier (who was mid-haircut and has half his head shaved), Eddie's former friend Sonia (who has spent her entire break trying to beat a video game and was mid-battle with the final boss), and siblings Trey and Sage (who are dealing with major sibling drama). As they group up to cover more ground and find out what happened, they realize that their families aren't coming back anytime soon. And as night falls, the crew realizes that they aren't just the only people left in the neighborhood, they might be the only people left... anywhere. 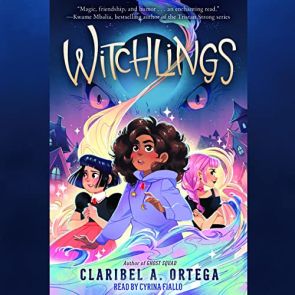 Written by Claribel A. Ortega, narrated by Cyrina Fiallo

Every year, in the magical town of Ravenskill, Witchlings who participate in the Black Moon Ceremony are placed into covens and come into their powers as full-fledged witches. And twelve-year-old Seven Salazar can't wait to be placed in the most powerful coven with her best friend! But on the night of the ceremony, in front of the entire town, Seven isn't placed in one of the five covens. She's a Spare! Spare covens have fewer witches, are less powerful, and are looked down on by everyone. Even worse, when Seven and the other two Spares perform the magic circle to seal their coven and cement themselves as sisters, it doesn't work! They're stuck as Witchlings—and will never be able to perform powerful magic. Seven invokes her only option: the impossible task. The three Spares will be assigned an impossible task: If they work together and succeed at it, their coven will be sealed and they'll gain their full powers. If they fail... Well, the last coven to make the attempt ended up being turned into toads. Forever. But maybe friendship can be the most powerful magic of all… 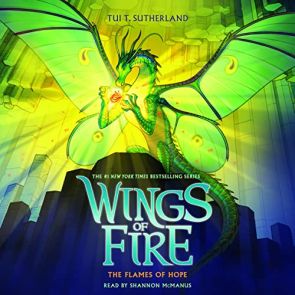 The Flames of Hope

In the last installment of the third arc of the Wings of Fire series, tensions are higher than ever as we prepare for a fight for the survival of all dragonkind! 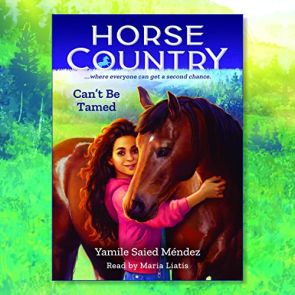 Carolina Aguasvivas grew up on the newly renamed Paradise Ranch, which she knows down to every last pony. But things are sure to change when the new owner's daughter, Chelsie Sánchez, sweeps in with an attitude and a feisty Thoroughbred named Velvet. The mare is skittish, headstrong -- and Carolina is determined to ride her. Chelsie, who considers herself too good to clean stalls, certainly doesn't seem like a real horse girl. Somehow, she thinks the same of Carolina. But Caro knows she's more worthy than Chelsie to help Velvet recover, and she's ready to prove it. The girls may discover they have more in common than they think... including a passion for bringing the healing power of horses to every kid.

For Listeners Ages 13 and Up 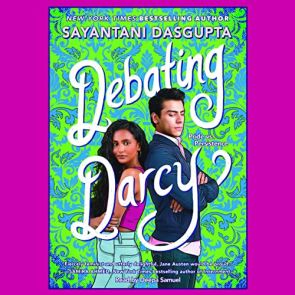 It is a truth universally acknowledged that there are two types of people in the hypercompetitive world of high school forensics competitions: speakers and debaters. Nobody knows this better than Leela Bose, a life-long speech competitor. When she meets Firoze Darcy, an incorrigible debater, Leela has no choice but to try and tolerate him. His elitist private school is included in the state league she’s competing in and their paths will inevitably cross. But why simply tolerate Firoze when Leela can one-up him? She decides to switch into the debate category of the competition to prove that women are just as capable as men. But the situation is more complicated than Leela anticipated, and her participation in the tournament reveals that she might have tragically misjudged the debaters in the forensics league -- including Firoze Darcy. Leela will have to confront her assumptions, not only about other people, but about herself, if she’s to have any hope of deciphering her complicated feelings for Darcy or succeeding in the forensics competition. 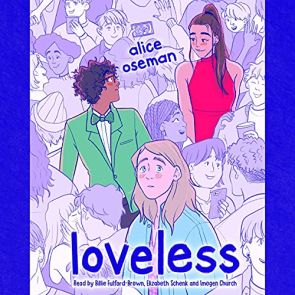 From the marvelous author of Heartstopper comes an exceptional YA novel about discovering that it's okay if you don't have sexual or romantic feelings for anyone . . . since there are plenty of other ways to find love and connection. This is the funny, honest, messy, completely relatable story of Georgia, who doesn't understand why she can't crush and kiss and make out like her friends do. She's surrounded by the narrative that dating + sex = love. It's not until she gets to college that she discovers the A range of the LGBTQIA+ spectrum -- coming to understand herself as asexual/aromantic. Disrupting the narrative that she's been told since birth isn't easy -- there are many mistakes along the way to inviting people into a newly found articulation of an always-known part of your identity. But Georgia's determined to get her life right, with the help of (and despite the major drama of) her friends. 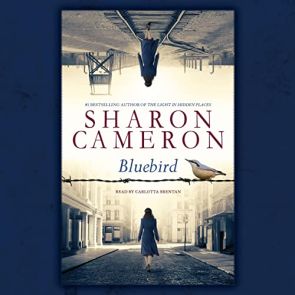 Description In 1946, Eva leaves behind the rubble of Berlin for the streets of New York City, stepping from the fiery aftermath of one war into another, far colder one, where power is more important than principles, and lies are more plentiful than the truth. Eva holds the key to a deadly secret: Project Bluebird -- a horrific experiment of the concentration camps, capable of tipping the balance of world power. Both the Americans and the Soviets want Bluebird, and it is something that neither should ever be allowed to possess. But Eva hasn't come to America for secrets or power. She hasn't even come for a new life. She has come to America for one thing: justice. And the Nazi that has escaped its net.

Ming survived the famine that killed his parents during China's "Great Leap Forward", and lives a hard but adequate life, working
in the fields. When a group of city boys comes to the village as part of a Communist Party re-education program, Ming and his friends aren't sure what to make of the new arrivals. They're not used to hard labor and village life. But despite his reservations, Ming befriends a charming city boy called Li. The two couldn't be more different, but slowly they form a bond over evening swims and shared dreams. But as the bitterness of life under the Party begins to take its toll on both boys, they begin to imagine the impossible: freedom.