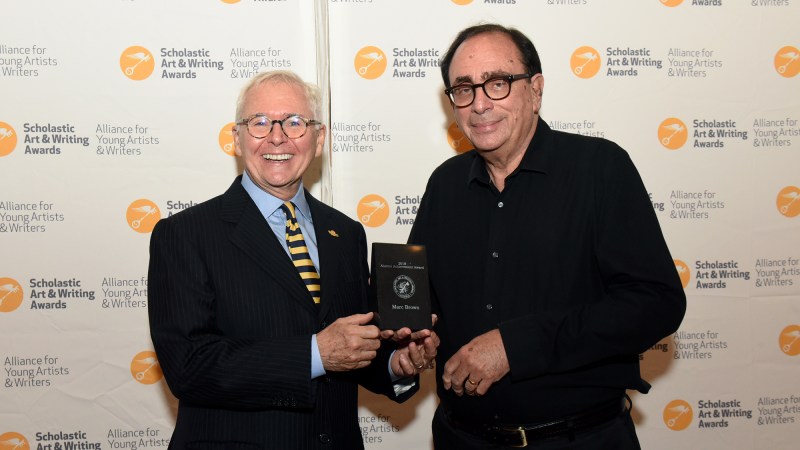 Last week, teen artists and writers from across the country were recognized at Carnegie Hall as National Medalists in the 2018 Scholastic Art & Writing Awards—the nation’s longest-running and most prestigious recognition program for creative teens in grades 7–12, presented by the nonprofit Alliance for Young Artists & Writers.

These students join the ranks of notable Awards alumni who received recognition in the Scholastic Art & Writing Awards when they were teenagers, including Andy Warhol, Truman Capote, Sylvia Plath, Kay WalkingStick, Stephen King… and Marc Brown, an Emmy® Award-winning children’s author, illustrator, and creator of the children’s book and television series Arthur!

When he was just a junior high student in Pennsylvania in 1963, Marc received his Scholastic Award for a hand-colored woodcut. Flash forward to today and Arthur, the little aardvark, has sold over 65 million books in the United States alone and is enjoyed by children through apps, e-books, and television shows in more than 80 countries around the world. Marc was honored during Thursday’s National Ceremony as this year’s Alumni Achievement Award recipient, presented by R.L. Stine, author of the worldwide bestselling Goosebumps series. (Did you know that R.L. Stine and Marc Brown co-wrote a book? Check out Mary McScary here.)

We recently caught up with Marc to ask him about his life, the Scholastic Art & Writing Awards, and his advice for teens who hope to have a career in the arts. Check out the full Q&A below!

You were recognized in the Scholastic Art & Writing Awards in 1963 for a woodcut you made. What does this Award mean to you?

Well, at the time it was a very important validation of my work and it helped me make the important decision to go to art school. This was not the decision my parents wanted me to make.

Which Arthur character do you identify with the most?

An interviewer once asked me to describe Arthur in one sentence. Easy! He’s a slightly insecure eight year old aardvark navigating the mud puddles of life. I guess he’s me!

What books have had the biggest influence on your life?

The first one that comes to mind was reading Where the Wild Things Are to my baby sister when I was in high school. I was so moved by the way Maurice Sendak told such an elegant story so simply with words AND pictures. That stayed with me. Another would be John Adams by David McCullough. I have read it three times. I love biographies and American History. Max Perkins: Editor of Genius by A. Scott Bergis another book I’ve reread more than once. I’m fascinated by the way he as an editor worked with such diverse and difficult talents to coax from them some of the greatest books ever written. Lastly, almost anything that James Marshall ever wrote or illustrated. He was a genius who with the most minimal dialog could establish the most vivid characters. George and Martha made him a rock star.

We know that children are more likely to become lifelong readers and learners if they have strong role models at home and in the community. Who has been a reading role model in your life?

No one person comes to mind, maybe my dad. But I had two of the most amazing storytellers growing up, my great grandmother and my Grandma Thora who told us stories whenever we asked for them. It was magical how they could pull stories from thin air. Then Grandma Thora gave me a copy of The Adventures of Tom Sawyer...

What message do you have for young artists and writers who are following in your footsteps?

If you are truly serious about this, respect the intelligence of children and DON’T GIVE UP!

10 Benefits of Having a Library Card