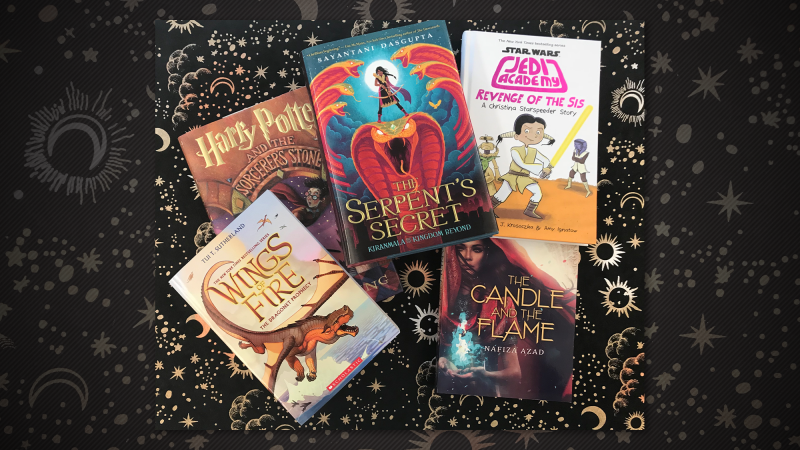 5 fantasy worlds to escape to this summer

If you're looking for the perfect summer getaway, look no further than the pages of a book!

We've rounded up five fantasy worlds for your reader to get lost in this summer. From Hogwarts to a Kingdom Beyond to a galaxy far, far away, these books are a one-way ticket to a new world.

Harry Potter's life is miserable. His parents are dead and he's stuck with his heartless relatives, who force him to live in a tiny closet under the stairs. But his fortune changes when he receives a letter that tells him the truth about himself: he's a wizard.

A mysterious visitor rescues him from his relatives and takes him to his new home, Hogwarts School of Witchcraft and Wizardry. A middle school in a galaxy far, far away....Jedi Academy! In the first book, Roan's one dream is to leave home and attend Pilot Academy like his older brother, father, and grandfather. But just as Roan is mysteriously denied entrance to Pilot School, he is invited to attend Jedi Academy--a school that he didn't apply to and only recruits children when they are just a few years old. That is, until now...

The seven dragon tribes have been at war for generations, locked in an endless battle over an ancient, lost treasure. A secret movement called the Talons of Peace is determined to bring an end to the fighting, with the help of a prophecy, a foretelling that calls for great sacrifice. The Candle and the Flame by Nafiza Azad

atima lives in the city of Noor, a thriving stop along the Silk Road. There the music of myriad languages fills the air, and people of all faiths weave their lives together. However, the city bears scars of its recent past, when the chaotic tribe of Shayateen djinn slaughtered its entire population -- except for Fatima and two other humans. Now ruled by a new maharajah, Noor is protected from the Shayateen by the Ifrit, djinn of order and reason, and by their commander, Zulfikar. But when one of the most potent of the Ifrit dies, Fatima is changed in ways she cannot fathom, ways that scare even those who love her. Oud in hand, Fatima is drawn into the intrigues of the maharajah and his sister, the affairs of Zulfikar and the djinn, and the dangers of a magical battlefield.

Kiranmala and the Kingdom Beyond series by Sayantani DasGupta

On the morning of her twelfth birthday, Kiranmala is just a regular sixth grader living in Parsippany, New Jersey, until her parents mysteriously vanish and a drooling rakkhosh demon slams through her kitchen, determined to eat her alive. It turns out that there might be some truth to her parents' fantastical stories — for example, that Kiranmala is a real Indian princess who comes from a secret place not of this world.

To complicate matters, two crush-worthy princes ring her doorbell, insisting they've come to rescue her. Suddenly, Kiran is swept into another dimension full of magic, winged horses, moving maps, and annoying, talking birds. There she must solve riddles and battle demons, all while avoiding the Serpent King of the underworld and the Rakkhoshi Queen, in order to find her parents and, essentially, to save New Jersey, as well as her entire world and everything beyond it.