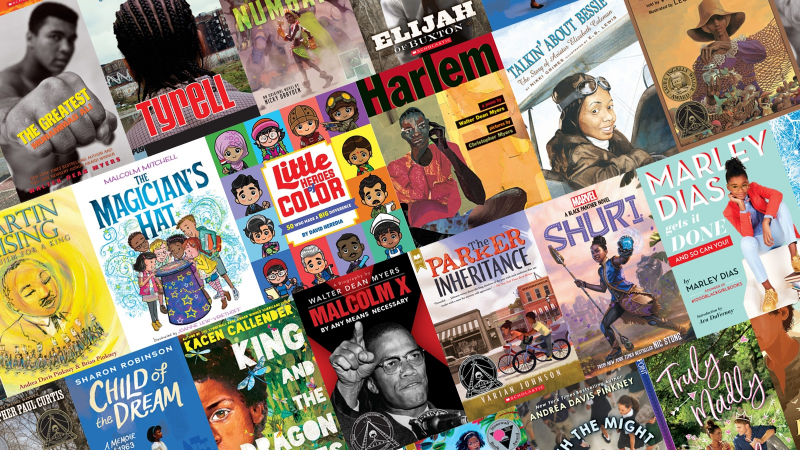 Today and always we want to amplify the voices of our Black creators by sharing their incredible stories. Featuring books by Andrea Davis Pinkney, Walter Dean Myers, Varian Johnson, and more, there’s a book for every reader!

With imagination and power, the award-winning Pinkney duo celebrates MLK's nonviolent struggle for civil rights — as he transforms America through the spirit of love.

The Magician’s Hat by Malcolm Mitchell

Today is Family Fun Day at the library, and a magician puts on a show with his special trick– a book that helps children become whatever they want to be and makes their dreams come true through pages and words and the adventures that follow

A perfect book for tomorrow's leaders, Little Heroes of Color educates and inspires by showing readers 50 trailblazers from a range of races and ethnicities.

Talkin’ About Bessie by Nikki Grimes; Illustrated by E. B. Lewis

Elizabeth "Bessie" Coleman was always being told what she could and couldn't do but she didn't let that stop her. Although she was only 11 when the Wright brothers took their historic flight, she vowed to become the first black female pilot.

This Newbery Medal and Coretta Scott King Award winner tells the gripping tale of eleven-year-old Elijah Freeman, the first child born into freedom in Buxton, Canada, who goes on a journey to seek justice, and finds so much more.

As the daughter of Jackie Robinson, Sharon had incredible access to some of the most important events of the era. But Sharon was also dealing with her own personal problems, like going through puberty, being one of the only black children in her wealthy Connecticut neighborhood, and figuring out her own role in the fight for equality. This memoir follows Sharon as she goes through that incredible year of her life.

Being born during a hurricane is unlucky, and twelve-year-old Caroline has had her share of bad luck lately. She's hated and bullied by everyone in her small school on St. Thomas of the US Virgin Islands, a spirit only she can see won't stop following her, and — worst of all — Caroline's mother left home one day and never came back. But when a new student named Kalinda arrives, Caroline's luck begins to turn around.

On a cold winter night, Iris and her best friend, Daniel, sneak into a clearing in the woods to play in the freshly fallen snow. There, Iris finds the crumbling gravestone of a young girl, Avery Moore, right beneath her. Immediately, strange things start to happen to Iris. Obsessed with figuring out what's going on, Iris and Daniel start to research the area for a school project. They discover that Avery's grave is actually part of a neglected and forgotten Black cemetery, dating back to a time when White and Black people were kept separate in life — and in death. As Iris and Daniel learn more about their town's past, they become determined to restore Avery's grave and finally have proper respect paid to Avery and the others buried there.

When Candice finds the letter, she isn't sure she should read it. It's addressed to her grandmother, who left Lambert in shame. But the letter describes a young woman. An injustice that happened decades ago. A mystery enfolding the letter-writer. And the fortune that awaits the person who solves the puzzle.

Everyone thinks Jarrett and his foster brother Kevon should be friends, but that's not going to happen. Not when Kevon's acting like he's better than Jarrett, and not when Jarrett finds out Kevon's keeping some major secrets. Jarrett doesn't think it's fair that he has to share his room, his friends, and his life with Kevon. He has to do something about it, but what?

This is a story about America during and after Reconstruction, one of history's most pivotal and misunderstood chapters. In a stirring account of emancipation, the struggle for citizenship and national reunion, and the advent of racial segregation, the renowned Harvard scholar delivers a book that is illuminating and timely.

Marley Dias Gets It Done: And So Can You! by Marley Dias

Through My Eyes by Ruby Bridges

With the Might of Angels by Andrea Davis Pinkney

In the fall of 1955, twelve-year-old Dawn Rae Johnson's life turns upside down. After the Supreme Court ruling in Brown v. Board of Education, Dawnie learns she will be attending a previously all-white school. She's the only one of her friends to go to this new school and to leave the comfort of all that is familiar to face great uncertainty in the school year ahead.

Much like Vibranium, the Heart Shaped Herb is essential to the survival and prosperity of Wakanda. But something is wrong. The plants are no longer growing. No matter what the people of Wakanda do, they can't create new herbs. And their supply is running short. It's up to Shuri to travel from Wakanda in order to discover what is killing the Herb, and how she can save it, in this all-new, original series from Nic Stone.

You Should See Me in a Crown by Leah Johnson

When the financial aid Liz Lighty was counting on unexpectedly falls through, Liz's plans come crashing down . . . until she's reminded of her school's scholarship for prom king and queen. There's nothing Liz wants to do less than endure a gauntlet of social media trolls, catty competitors, and humiliating public events, but despite her devastating fear of the spotlight she's willing to do whatever it takes to get to her dream school.

An #ownvoices Point Paperback original that is like The Princess Diaries for a younger generation. Pure wish-fulfillment fun from author Debbie Rigaud.

Sixteen-year-old Paris Secord's (aka DJ ParSec) career — and life has come to an untimely end, and the local music scene is reeling. No one is feeling the pain more than her shunned pre-fame best friend, Kya, and Paris's chief groupie, Fuse. But suspicion trumps grief, and since each suspects the other of Paris's murder, they're locked in a high-stakes game of public accusations and sabotage.

Giselle Boyer and her identical twin, Isabelle, are as close as sisters can be, even as their family seems to be unraveling. Then the Boyers have a tragic encounter that will shatter everyone's world forever. Giselle wakes up in the hospital, injured and unable to speak or move. Trapped in the prison of her own body, Giselle must revisit her past in order to understand how the people closest to her -- her friends, her parents, and above all, Isabelle, her twin -- have shaped and defined her.

Sorry Not Sorry by Jaime Reed

Janelle and Alyssa used to be best friends. They knew each other's deepest secrets and went through the hardest times together. But that was then. Now? Their status is somewhere between frenemies and full-on rivals. Until the day Alyssa collapses and is rushed to the hospital and, in a stunning twist of fate, the only person who might be able to save Alyssa's life is Janelle. But will the girls' bitter past get in the way of their futures?

Tyrell can't get a break. He's living (for now) with his spaced-out mother and little brother in a homeless shelter. His father's in jail. His girlfriend supports him, but he doesn't feel good enough for her -- and seems to be always on the verge of doing the wrong thing around her. There's another girl at the homeless shelter who is also after him, although the desires there are complicated. Tyrell feels he needs to score some money to make things better. Will he end up following in his father's footsteps?

A powerful novel in the voices of Adonis, who uses a wheelchair and loves books, and Autumn, who struggles with reading. They don’t think they have anything in common, but find an unexpected, affirming friendship.

Being a teen is hard enough. But when you have autism--or when your sibling is struggling with the condition--life can be a topsy-turvy ride. What happens when you come face-to-face with dating, parties, sports, body changes, school, and kids who just don’t get you? Where do you turn when your sibling with autism is the butt of jokes, the victim of misunderstood social cues, and the one everyone thinks is weird?

The Hero of Numbani by Nicky Drayden

In the technologically advanced African city of Numbani, in the not-so-distant future, a hero named Efi Oladele rises! Efi may only be eleven, but after she witnesses an attack on her city by the terrorist known as Doomfist, she realizes you're never too young to make a difference.

Malcolm X: By Any Means Necessary by Walter Dean Myers

A powerful and timely biography of civil rights activist Malcolm X, one of the most controversial and compelling figures in American history.

An inspiring biography of Muhammad Ali: Olympic gold medalist, former heavyweight champion, and one of the most influential people of all time.