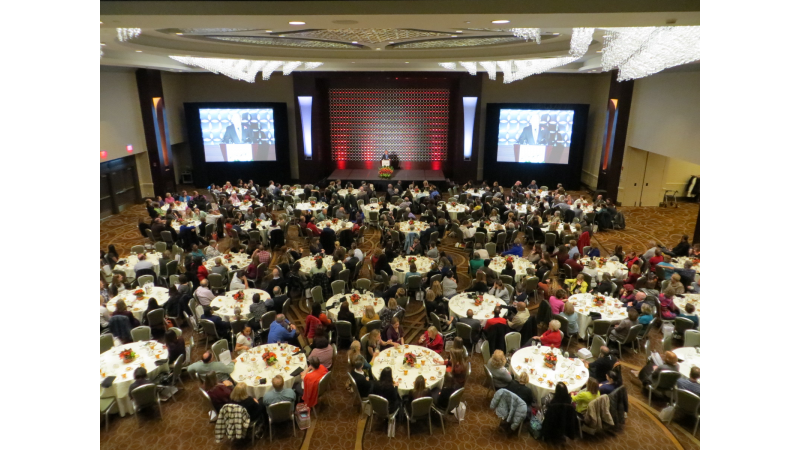 Today OOM welcomes John Mason, Director of Education and Library Marketing for the Scholastic Trade publishing division. John is a wonderful storyteller and we’ve asked him to share his experiences about the annual M.R. Robinson Reception & Dinner, a longstanding, well-respected tradition at the annual National Council of Teachers of English Conference which was held in Boston last week. John joined Scholastic in 1986 and just attended his twenty sixth M.R. Robinson dinner! Take it away, John.

1) What do you think makes the M.R. Robinson Dinner so special? In other words, why have you made it a point to attend the event year after year?

John Mason (JM): There are several things that make the M.R. Robinson Dinner special.  It starts with the sense of history that this event conveys.  Every year, Dick Robinson reads the same speech, which is the same speech that his father, Maurice Robinson, the founder of Scholastic in 1920, used to read every year.  So it's a tradition that has lasted for many decades.  The speech recounts how NCTE always used to take place over Thanksgiving, and Maurice Robinson was sad to see people dining alone or in small groups in the hotel dining room, so one year he invited a few friends to join him for Thanksgiving dinner, and the next year more friends asked if they could join the group, and the event just grew and grew.  The first year that it was planned in advance was in 1932 when NCTE was in Memphis.

Many people have been attending the dinner for years, and are happy to hear the same speech every year - in fact they become quite emotional about it!  The other thing that is special is that there is no hidden agenda.  It is not explicitly a marketing event.  The name "Scholastic" is never mentioned once.  It is, in a very real sense, a continuation of that gathering of friends for Thanksgiving dinner.  It is Scholastic's way of saying thank you to the English teachers who are our partners in our mission of education and literacy.

When Dick thanks the guests after the speech, he always reads out the names of the current board members of NCTE who are there, and then proceeds to read the names of all the past Presidents of NCTE who are there, with the year they were President, and each one stands up as he names them.  And then the audience applauds after he has named them all.

When I joined Scholastic from another publisher and attended my first M.R. Robinson Dinner in 1986, I was amazed at the power of this event and the unique position occupied by Scholastic in this arena.  I had not been aware of it before!  No other publisher has the deep relationships and connections with this teacher organization going back so many decades.  It is impressive, and conveys so much without explicitly saying it, and above all it is not a marketing gimmick, it is authentic and historic.  I think these are some of the reasons people keep coming to this event year after year.

2) In the past 27 years, what have been some of your favorite memories from the dinner?

JM:  My favorite memory is actually the very first time I attended it, when I invited our authors who were at the convention to attend the dinner with me.  It turned out that this had never been done before--the dinner previously only included educators!  However, it soon became apparent that inviting our authors was a great way to make them feel part of the larger "Scholastic family."  They, too, were impressed by the event and by Scholastic's tradition and reach to educators.  And now, Dick always recognizes the presence of our authors and thanks them for being there.

3) In your opinion, which year featured the best turkey dinner?

JM:  I have no memory of a "best turkey dinner!"  As far as I can remember, the dinner never varies.  Every year, the food is as unchanging as the speech!