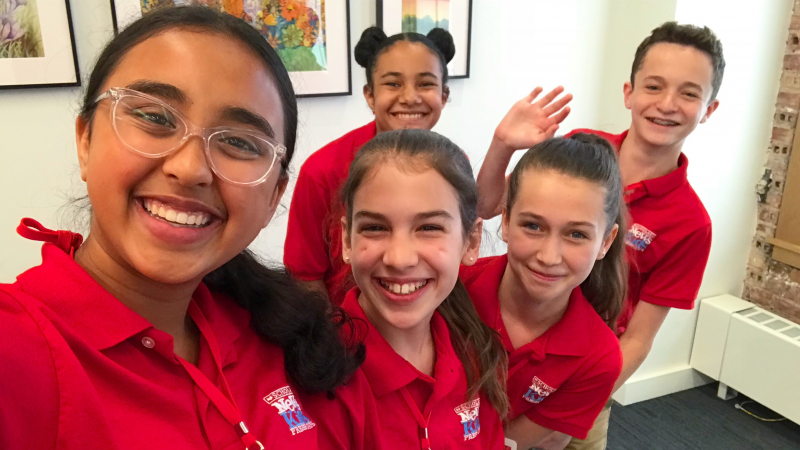 It has been an exciting year for Scholastic Kids Press! Kid Reporters have not only made headlines themselves, but also written many of their own. Before we usher in the new decade, and celebrate the program’s 20th anniversary, we thought we’d wrap up 2019 by revisiting 19 news articles written by Kid Reporters that captured some of the year’s biggest headlines.

After the Fires
Jaxon Jones wrote a powerful first-hand account about what it was like to flee the Woolsey Fire, which burned 97,000 acres over the course of two weeks in California.

The Government Shutdown
Grace Denny’s coverage of the shutdown, which affected 800,000 federal employees took a look at the recovery process at the start of the year.

Helping Flood Victims in the Midwest
After catastrophic flooding in parts of Iowa and Nebraska, Brandon Peterson spoke with residents about rebuilding efforts. Remembering the Heroes
Leo Tobbe took a look at a bill passed earlier this year to extend the 9/11 Victim Compensation Fund.

The Rebirth of Independent Bookstores
Stone Shen spoke with the owners of independent bookstores about running brick and mortars in the age of e-commerce.

Speaker Pelosi Holds the Gavel
Ryan Stoltz, who retired from his Kid Reporter duties after four years in the program, interviewed Representative Nancy Pelosi about her second term as House Speaker.

Protests Continue in Hong Kong
Benjamin Who interviewed a protester during the summer about the unrest in the city.

What Is a Balut?
Colin Adrien Co Roxas-Chua introduced readers to the local delicacy that is sold by street vendors in the Philippines.

Teachers Strike Ends at Chicago Schools
Ava-Kelly Gray spoke with Chicago Public School educators and Jesse Sharkey, president of the Chicago Teachers Union about one of the longest strikes in the school district’s history. Kids Stage a Global Climate Strike
Andrew Raymundo interviewed youth activists at a climate strike in Florida, on a day of global protests that were led by kids.

A Controversial Telescope in Hawaii
Lucia Dong spoke with native Hawaiians about plans to build an observatory on Mauna Kea, a sacred mountain on the island of Hawaii. Gazing at the Stars in Thailand
Gemmy Somboontham attended a star-gazing event organized by the National Astronomical Research Institute of Thailand (NARIT) that showed kids the universe can be understood and enjoyed by everyone.