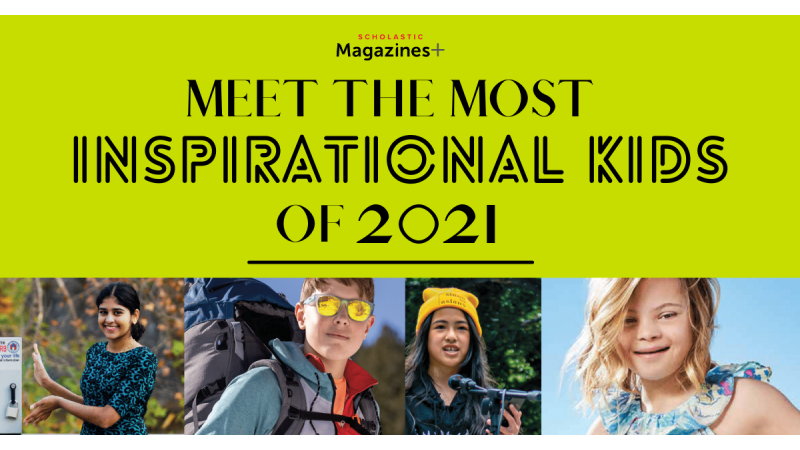 Before we say farewell to 2021, the editors of Scholastic Magazines+ are highlighting some of the most inspiring students they got to interview this past year. These 15 amazing and bold kids have taken on major challenges, brought their ideas to life, and instilled change —inspiring their peers, communities and us along the way!

Check out the list of 15 of the most inspirational kids we met in 2021, as well as the causes they’ve championed, below. You can also read their real-life stories as featured in Scholastic Magazines+.

In the summer of 2019, Ben Davis was on a backpacking trip with his camping group in Utah, when he was unexpectedly attacked by a black bear in the early hours of the morning. Despite being severely injured, Ben kept calm and was able to get away from the bear, as well as save his fellow campers in the process. Despite undergoing such a scary experience, Ben has said that being attacked hasn’t deterred him from camping ever again; rather, his experience of surviving has taught him that with a bit of courage and confidence, he is able to persevere through any high-stress situation he comes to face.  Read the full article in Scholastic Action, here.

Throughout the pandemic, four kids from across the country became everyday superheroes by helping out their communities in their own unique ways. Thomas ‘TJ’ Kim, a teen pilot in Virginia, was able to help local hospitals experiencing supply shortages by flying donated personal protective equipment to those in need. Maya Shukla, a young baker in Washington, created a blog to help connect and inspire kids stuck at home to keep up with their own hobbies. Israel Smith, a student in Georgia, created and coded a video game to help kids combat their fears about the coronavirus pandemic by fighting it digitally. Lastly, Ria Garg, a teen in Maryland, helped begin Teens Helping Seniors, a service that delivers groceries to those who are at high risk of catching COVID-19. Read the full article in Scholastic Dynamath, here.

After seeing a video of an elderly Asian man being attacked, Ashlyn So was so overcome with dismay that she immediately felt the need to take action into her own hands. Within the next week, she was able to organize her first rally that hundreds of people attended in order to protest again anti-Asian hate. Since that day, Ashlyn has organized another rally, given empowering speeches at dozens of other protests, circulated a petition urging her school district to include AAPI studies to its curriculum, and create a line of “Stand for Asians” hats, with all proceeds going toward AAPI communities. Read the full article in Junior Scholastic, here.

In an effort to spread kindness, last Thanksgiving Orion Jean had set a goal to donate meals to people within his community who were food insecure. He called his plan ‘Race to 100,000 Meals’ and worked with a local group to help spread the word about his mission. After successfully donating more than 100,000 meals, Orion wanted to further his mission of making the world a kinder place by starting his Race to Kindness campaign, through which he has been able to donate thousands of books and toys to families in need. In addition to his campaign, Orion has written his very own book called A Kids Book About Leadership, which is a guide to help teach people that it’s easy to be kind. Read the full article in Scholastic News Edition 3, here.

Nothing Holding Him Back – Isaiah Bingham, 11

Despite being legally blind, Isaiah Bingham, a teen from Delaware, never lets his sight impairment hold him back from reaching his goals and passions. Last summer, Isaiah and his parents signed him up for football, and although his parents were nervous, Isaiah persevered and became his football team’s captain. Not only is Isiah still playing football, but he also has started his own clothing line and is writing a book about his life. Read the full article in Scholastic News Edition 4, here.

In 2019 Dasia Taylor entered her school’s science fair and ended up inventing an award-winning scientific invention— stitches that change color when a wound is infected. Dasia was inspired when she read an article online about ‘smart’ sutures that used tiny sensors to monitor injuries. However, Dasia realized that those sutures were super expensive and unaffordable for most people in need around the world. That’s when she began brainstorming a more cost-effective version of stitches and after months of experimenting, she was able to create her own color-changing sutures. Since that day, Dasia has entered her invention in several science fairs, won multiple awards, and has now patented her invention! Read the full article in Science World, here.

After hearing about a truck being swept away in a flood back in 2016, sisters Laya and Kaavya Yalamanchili, along with their friend Satvik Dasari, were motivated to develop a system to prevent tragedies such as that one from happening in their community. After conducting research about low-water crossings and a lot of hard work, the three of them created HydroAlert, an affordable system that automatically measures water levels and alerts drivers about floods ahead of time. Laya, Kaavya, and Satvik are all looking to expand the HydroAlert system into other counties and cities in Texas, hoping it can be used worldwide. Read the full article in Scope, here.

You Are Enough – Sofia Sanchez, 12

Twelve-year-old model, actress, and author, Sofia Sanchez is dedicated to inspiring kids to be their authentic selves. Sofia, who has Down syndrome, has been an advocate for loving yourself and has used her platform to show kids it’s always OK to be yourself. In her new picture book, You Are Enough, she preaches her message that we should embrace being different, because being different is what ultimately makes you special! Read the full article in Storyworks, here.

Wesay Metoxen has been playing lacrosse since he was a little kid. But for Wesay, lacrosse is much more than a sport—it’s a sacred tradition that has been in his family for centuries. Wesay is a part of the Oneida Nation of Wisconsin, his ancestors belonging to a group of Native American nations called the Haudenosaunee, who have been playing lacrosse for about 1,000 years! Not only is lacrosse Wesay’s passion, but it is also a way for him to stay connected to his family and his culture. Read the full story in Storyworks, here.

When Anika Chebrolu was 14, she discovered a potential treatment for COVID-19. She had been initially researching influenza treatments, but when the pandemic hit she pivoted her research to the coronavirus. Last fall, she was able to find a particle that can stop the virus from infecting human cells. In light of her research efforts, Annika was awarded the 3M Young Scientist Challenge. As of now Annika is 15 and is now working to turn her discovery into an antiviral drug. Read the full story in Upfront, here.