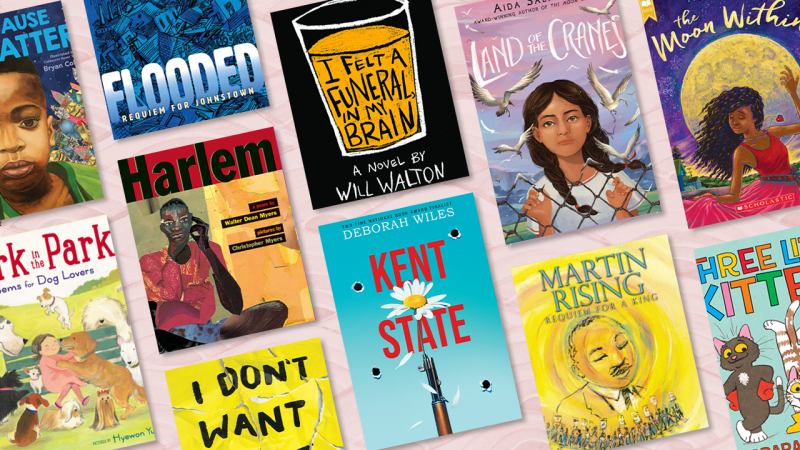 April is National Poetry Month so to celebrate we're celebrating some of our favorite stories that are told in verse. Whether you're a long time lover of poetry or new to the genre, we're sure you'll find the perfect book for you! Check them out below.

All Because You Matter by Tami Charles & Bryan Collier

In a rich embroidery of visions, musical cadence, and deep emotion, Andrea and Brian Pinkney convey the final months of Martin Luther King's life — and of his assassination — through metaphor, spirituality, and multilayers of meaning.

Bark in the Park!: Poems for Dog Lovers by Avery Corman & Hyewon Yum

Enjoy Avery Corman's canine poetry for an Afghan hound, basset hound, beagle, bloodhound, Daschshund, boxer, greyhound, and more as they stroll with their owners to the park. Hyewon Yum captures the unique characteristics of the owner and his pet as she beautifully illustrates the humorous walk from each dog's home to the park and back.

Why Am I Me? by Paige Britt, Selina Alk, & Sean Qualls

Have you ever wondered why you are you? Or who you would be if you were someone else? Someone taller, faster, smaller, smarter? Someone lighter, older, darker, bolder? Presented as a poetic exchange between two characters — who don't realize they are thinking and asking the very same questions — this beautiful celebration of our humanity and diversity invites readers of all ages to imagine a world where there is no you or me, only we. If the first step toward healing the world is to build bridges of empathy and to celebrate rather than discriminate, Why Am I Me? helps foster a much-needed sense of connection, compassion, and love.

Father and son celebrate a rich and vibrant neighborhood that has been a historic center of African-American culture in New York City. Walter Dean Myers gives poetry a jazz backbeat to tell Harlem's story.

Celi Rivera's life swirls with questions. About her changing body. Her first attraction to a boy. And her best friend's exploration of what it means to be genderfluid. But most of all, her mother's insistence she have a moon ceremony when her first period arrives. It's an ancestral Mexica ritual that Mima and her community have reclaimed, but Celi promises she will NOT be participating. Can she find the power within herself to take a stand for who she wants to be?

Land of Cranes by Aida Salazar

Nine-year-old Betita knows she is a crane. Papi has told her the story, even before her family fled to Los Angeles to seek refuge from cartel wars in Mexico. The Aztecs came from a place called Aztlan, what is now the Southwest US, called the land of the cranes. They left Aztlan to establish their great city in the center of the universe — Tenochtitlan, modern-day Mexico City. It was prophesized that their people would one day return to live among the cranes in their promised land. Papi tells Betita that they are cranes that have come home.

Then one day, Betita's beloved father is arrested by Immigration Customs Enforcement (ICE) and deported to Mexico. Betita and her pregnant mother are left behind on their own, but soon they too are detained and must learn to survive in a family detention camp outside of Los Angeles. Even in cruel and inhumane conditions, Betita finds heart in her own poetry and in the community she and her mother find in the camp. The voices of her fellow asylum-seekers fly above the hatred keeping them caged, but each day threatens to tear them down lower than they ever thought they could be. Will Betita and her family ever be whole again?

Before the flood, Johnstown, Pennsylvania, was a working class industry town filled with immigrants, factory workers, shop owners, housewives, and schoolchildren, all with hopes and dreams for the future. Sixteen-year-old Joe Dixon opens a newsstand and aspires to make a name for himself like Andrew Carnegie; Monica Fagan longs to travel to her mother's native Ireland, while her younger brother Daniel just wants to hike the mountain and enjoy clean air; George Hoffman yearns for a job so he can relieve his family's burdens; William James works hard to be a poet; and little Gertrude Quinn is happy to collect treasures from her father's store.

Above the soot-filled town, an elite hunting and fishing club built on a manmade lake draws America's wealthiest business barons — Carnegie, Mellon, and Frick. Though repeatedly warned, they ignore the pleas to fix the deteriorating dam that holds the lake. And when heavy rains come, the dam bursts, and Johnstown is decimated. As great as the tragedy was the injustice: The club members eschewed any blame and claimed the flood was a natural disaster.

For seventeen-year-old Denver, music is everything. Writing, performing, and her ultimate goal: escaping her very small, very white hometown.So Denver is more than ready on the day she and her best friends Dali and Shak sing their way into the orbit of the biggest R&B star in the world, Sean "Mercury" Ellis. Merc gives them everything: parties, perks, wild nights -- plus hours and hours in the recording studio. Even the painful sacrifices and the lies the girls have to tell are all worth it.Until they're not. Denver begins to realize that she's trapped in Merc's world, struggling to hold on to her own voice. As the dream turns into a nightmare, she must make a choice: lose her big break, or get broken.Inspired by true events, Muted is a fearless exploration of the dark side of the music industry, the business of exploitation, how a girl's dreams can be used against her -- and what it takes to fight back.

As protestors roil the campus, National Guardsmen are called in. In the chaos of what happens next, shots are fired and four students are killed. To this day, there is still argument of what happened and why.

Told in multiple voices from a number of vantage points – protestor, Guardsman, townie, student – Deborah Wiles’s Kent State gives a moving, terrifying, galvanizing picture of what happened that weekend in Ohio … an event that, even 50 years later, still resonates deeply. 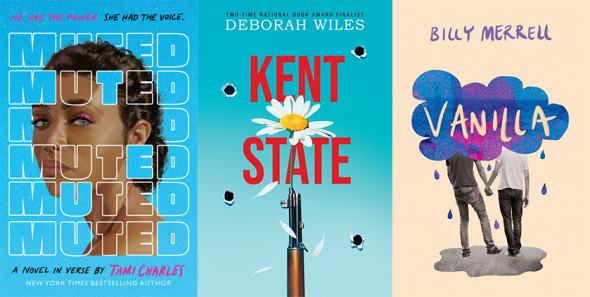 Vanilla and Hunter have been dating since seventh grade.

They came out together, navigated middle school together, and became that couple in high school that everyone always sees as a couple.

As high school goes, though, and as their relationship deepens, some cracks begin to show.

Hunter thinks they should be having sex. Vanilla isn’t so sure. Hunter doesn’t mind hanging out with loud, obnoxious friends. Vanilla would rather avoid them.

If they’re becoming different people, can they be the same couple?

I Don't Want to be Crazy by Samantha Schutz

This is a true story of growing up, breaking down, and coming to grips with a psychological disorder. When Samantha Schutz first left home for college, she was excited by the possibilities – freedom from parents, freedom from a boyfriend who was reckless with her affections, freedom from the person she was supposed to be. At first, she reveled in the independence … but as pressures increased, she began to suffer anxiety attacks that would leave her mentally shaken and physically incapacitated. Thus began a hard road of discovery and coping, powerfully rendered in this poetry memoir. 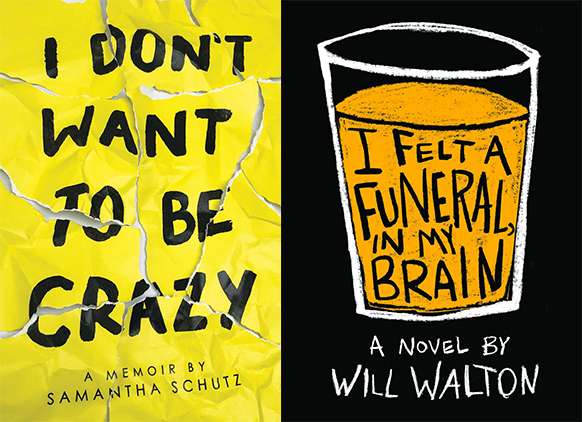 I Felt a Funeral, in My Brain by Will Walton

How do you deal with a hole in your life?

Do you turn to poets and pop songs?

Do you try on love just to see how it fits?

If you’re Avery, you do all of these things. And you write it all down in an attempt to understand what’s happened—and is happening—to you.

I Felt a Funeral, In My Brain is an powerful novel about navigating death and navigating life, at a time when the only map you have is the one you can draw for yourself.