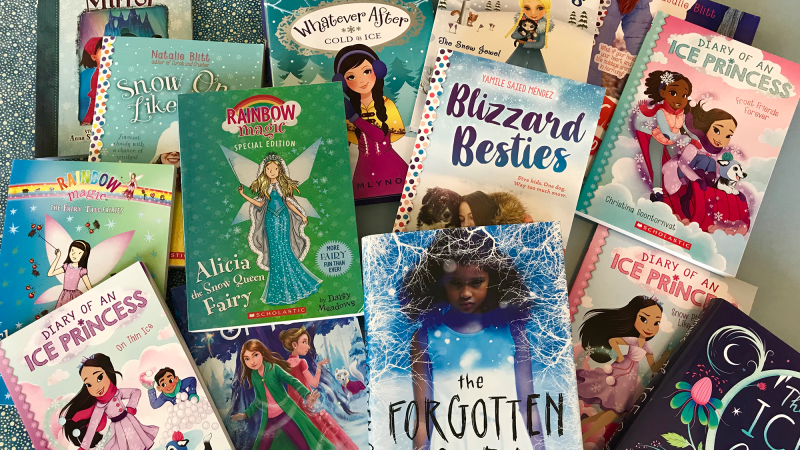 Get ready to go "Into the Unknown" with Frozen 2! If your child can't wait for the upcoming film, they can dive into an icy read.

We rounded up 14 books for the Frozen fan in your life!

Diary of an Ice Princess #1: Snow Place Like Home by Christina Soontornvat It's Winter Break at Hilltop Academy and Lina couldn't be more excited. With time off from school, Lina's parents say it's all right for her best friend, Claudia, to come up to their cloud palace for a sleepover (as long as she double pinkie-swears never to tell the royal family secret!). Claudia can't wait to see what it's like to actually be a real princess!

But she soon learns that all the stuffy palace protocol isn't nearly as fun as it sounds. The girls just have to get out and play! Claudia suggests they go down to the ground and have some fun with Lina's winter magic. They have a blast sledding and skating in the snow until an actual winter blizzard moves in. The girls are stuck on the ground, lost in the storm. They will have to get resourceful, be brave, work together — and use Lina's magic in a creative way — if they are going to find their way out. Diary of an Ice Princess #3: On Thin Ice by Christina Soontornvat

Princess Lina is loving groundling school. Her magic is still under wraps, she hangs out with BFF Claudia every day, and soon their class is taking a field trip to see penguins at the city aquarium!

Up in the sky, Lina's Granddad has decided to invite her mischievous cousin Jack Frost to give Lina extra tutorials in Winterheart magic. But when Jack tags along with Lina to school, his tricks wreak havoc on the big field trip. Can Lina keep her cool and save the day? Once upon a time, Rachel and Kirsty were excited to attend the special Fairy Tale Festival at TipTop Castle. But when Jack Frost steals the Fairy Tale Fairies' magic items, stories everywhere get all jumbled up. Even worse, characters from inside the books are coming to life and finding their way into the human world!
Eleanor's magic comb is in goblin hands — but not for long, if Rachel and Kirsty get their way. Without it, Snow White will never get back in her story! Once Upon a Fairy Tale #1: The Magic Mirror by Anna Staniszewski, illustrated by Macky Pamintuan

The Enchanted Kingdom is in a heat wave until the Ice Princess uses her magic mirror to make winter come; no wonder Kara and Zed are too hot. But the magic mirror is broken! And no one else wants to help the princess. Can Kara and Zed find out how to fix the mirror and bring back winter? Or will it be summer forever? Alicia the Snow Queen Fairy makes sure that everyone has a happy and fun time during the winter. But when her magic falls into Jack Frost's icy hands, the season goes haywire. Fairyland might end up frozen!

Fortunately for Alicia, Rachel and Kirsty are eager to help. They're going to help their newest fairy friend melt a hole in Jack Frost's chilling plans! Whatever After #6: Cold as Ice by Sarah Mlynowski

Brrrrrrrr. This fairy tale is FREEZING! Even though my brother and I had decided to stay away from the magic mirror, our puppy had other plans -- he bounded right in. What choice did we have but to go in after him? When we land in a winter wonderland, we realize we must be in the story of The Snow Queen. And this fairy tale is nothing like the movie. This Snow Queen is super-mean, and she turns our dog into an ice sculpture! To get home we'll have to - Defrost our furry friend - Ride a very chatty reindeer- Learn to ice-skate - Escape from a band of robbers. And if we're not careful . . . we could end up frozen ourselves! The Ice Garden by Guy Jones

Jess is allergic to the sun. She longs to be like normal children, to have friends with whom she can play outdoors. But her days are split between tutors and doctor's appointments.
One night, she sneaks out. And there, just beyond the empty playground she has longed to visit, she discovers a beautiful impossibility: a magical garden made completely of ice. A place that shields the sun and allows her to be free. But the sun isn't the only thing to fear.
The Ice Garden is an absorbing debut about the transformation of fear and loneliness through a bit of resilience and the healing power of friendships. Hearts of Ice by Adi Rule

Evangeline has been lonely her whole life. Her mother rarely lets her play outside . . . especially not when it's snowing. It's almost as if she wants to hide her daughter from the world...

For as long as she can remember, Evangeline has felt someone missing, like a best friend who moved away, or an imaginary friend she's forgotten. She knows it sounds crazy, but the thought has always given her comfort-the idea that there's someone waiting for her, looking for her. Someone who cares about her.

On her birthday, Evangeline finds her window has blown open, and her room is full of snow. There's a message written in the frost. One word. HELP

Evangeline learns that she has a sister, a twin, in fact. They were both born in another world — a land of snow and music and ancient magic. Now, someone is calling Evangeline back, and will stop at nothing to lure her into the magical realm where danger lurks. Mia can't wait for the Winter Festival; it's what her hometown, Flurry, Vermont, is famous for. Plus, maybe she can work up the courage to show the cute new boy, Yoshi, how much fun snowball fights can be. There's just one problem: The weather forecast isn't predicting a single snowflake before the big day. And what's the Winter Festival without snow?← Canceling the festival would spell disaster for the local businesses, including the cozy inn that Mia's family runs. With the town in chaos, Mia is suddenly at odds with Yoshi and with her best friend, Lark. Can Mia save the festival in time, or is she in for a wintry mix of troubles? "Do you know what it feels like to be forgotten?"

But they have awakened a jealous and demanding ghost, one that's not satisfied with their plans for getting recognition. One that is searching for a best friend forever — no matter what the cost. Charlie's moment to shine has arrived: She's determined to land a solo in this year's holiday concert. With her best friend, Renee, and smart, cute Eric in chorus with her, this winter promises to be pitch-perfect. Until disaster strikes. The concert is suddenly in danger of being canceled. And Charlie has to partner up with annoying, oh-so-perfect Matthew. If they can't work in harmony, Charlie's favorite time of year will be ruined. Vanesa Campos can't wait for winter vacation. Skiing on the slopes, sipping hot cocoa . . . her week at Pinecloud Lodge promises to be cozy and perfect. And maybe she can make some new friends! Never mind that glamorous Beck writes off Vanesa right away; twins Emma and Eric are ready to join the fun out in the snow. But when the flakes start falling, everything changes. Vanesa's little brother, Hunter, might be stranded out in the blizzard! Vanesa will have to team up with all the kids — plus one giant dog — to rescue him. Can she save her brother and discover which real friends will weather the storm with her?