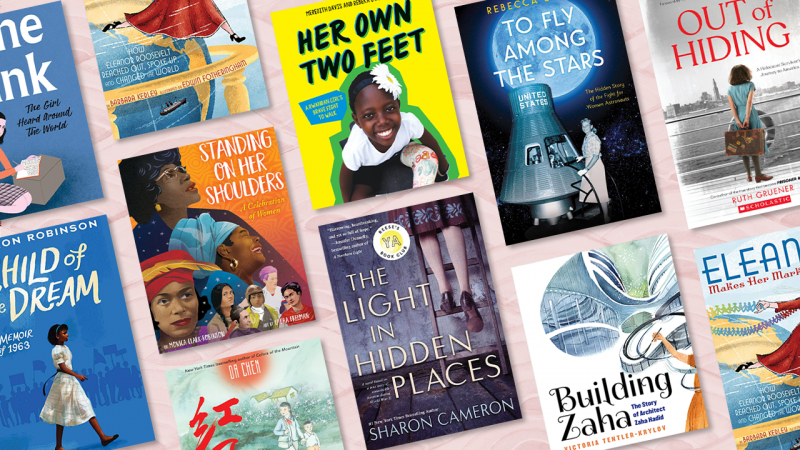 March is Women's History Month so to celebrate we're sharing books about some of the most inspiring women we know. Check them out and add them to your library so you can read them all year long!

Standing on Her Shoulders by Monica Clark-Robinson & Laura Freeman 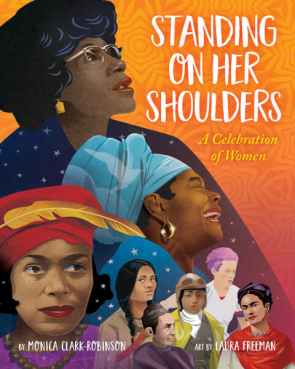 Standing on her Shoulders is a celebration of the strong women who influence us — from our mothers, sisters, aunts, and grandmothers to the women who fought for equality and acceptance in the United States.

Monica Clark-Robinson's lyrical text encourages young girls to learn about the powerful and trailblazing women who laid the path for their own lives and empowers them to become role models themselves. Acclaimed illustrator Laura Freeman's remarkable art showcases a loving intergenerational family and encourages girls to find female heroes in their own lives. 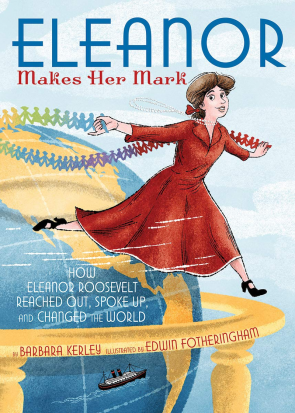 All her life, Eleanor Roosevelt hoped to "leave some mark upon the world."

She was a shy child who found joy in helping others.

A passionate young adult who longed for adventure.

An independent young woman who formed her own opinions.

A trustworthy partner who worked tirelessly for change.

So when her husband became president and she became first lady, Eleanor was ready to make her mark. With characteristic candor, compassion, and courage, she traversed the country and trotted the globe, championing the value and dignity of every human being and transforming the role of first lady. This graceful portrait of a vivacious American icon radiates the essence of Eleanor, a model for kindness and purpose, in her time and in ours. 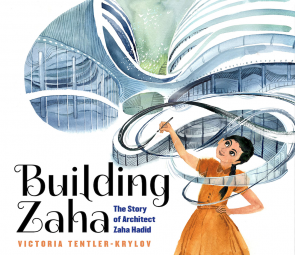 The city of Baghdad was full of thinkers, artists, and scientists, the littlest among them Zaha Hadid. Zaha knew from a young age that she wanted to be an architect. She set goals for herself and followed them against all odds. A woman in a man's world, and a person of color in a white field, Zaha was met with resistance at every turn. When critics called her a diva and claimed her ideas were unbuildable, she didn't let their judgments stop her from setting goals and achieving them one by one, finding innovative ways to build projects that became famous the world over. She persisted, she followed her dreams, and she succeeded. 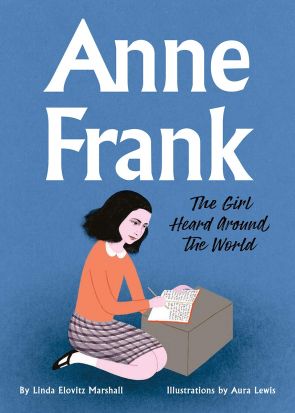 Linda Elovitz Marshall introduces readers to the story of Anne Frank in this powerful book about family, war, and the importance of finding your voice. During her two years in hiding from the Nazis, Anne Frank poured her soul into a red plaid diary named Kitty. She wrote honestly of the reality of Nazi occupation, of daily life in the annex, and of her longing to be heard. More than anything, Anne spoke the truth, and her words have echoed throughout history. Gorgeous prose and striking art deliver Anne's ever-relevant story with poignancy and grace, while robust back matter -- including biographical information, an author's note, and a timeline -- makes this the perfect book for history curriculums.

The Story of Ruby Bridges by Robert Coles & George Ford 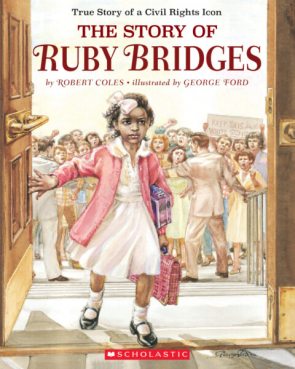 This beautiful picture book, illustrated by Coretta Scott King Award-illustrator George Ford, and written by Pulitzer Prize-winning author Robert Coles, tells the true story of six-year-old Ruby Bridges. In 1960, Ruby, a young African-American girl, entered a whites-only school in New Orleans. Even though she had to pass through crowds of angry protesters, Ruby bravely walked into the school. Every day for months, Ruby persevered. White parents pulled their children out of the school, and Ruby and her teacher were alone in the classroom. Still, Ruby and her family would not give in.Both the text and the watercolor paintings of this book capture Ruby's incredible strength, the love of her family, and the turmoil of America in the early 1960s. 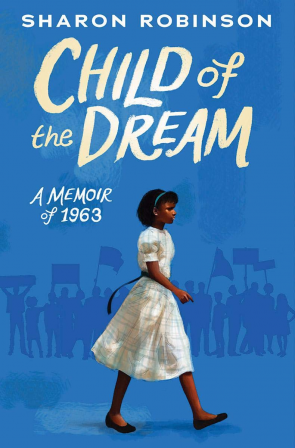 To Fly Among the Stars: The Hidden Story of the Fight for Women Astronauts by Rebecca Siegel 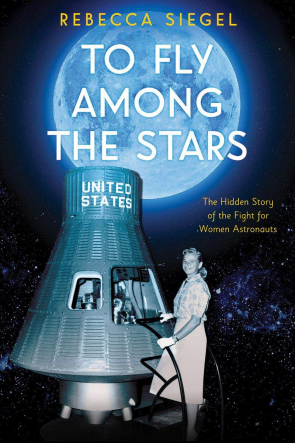 In the 1960s, locked in a heated race to launch the first human into space, the United States selected seven superstar test pilots and former military air fighters to NASA's astronaut class -- the Mercury 7. The men endured grueling training and constant media attention for the honor of becoming America's first space heroes. But a group of 13 women -- accomplished air racers, test pilots, and flight instructors -- were enduring those same astronaut tests in secret, hoping to defy social norms and earn a spot among the stars.

Out of Hiding: A Holocaust Survivor's Journey to America by Ruth Gruener 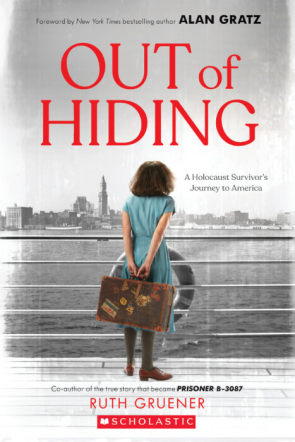 Ruth Gruener was a hidden child during the Holocaust. At the end of the war, she and her parents were grateful to be free. But their struggles as displaced people had just begun.

In war-ravaged Europe, they waited for paperwork for a chance to come to America. Once they arrived in Brooklyn, they began to build a new life, but spoke little English. Ruth started at a new school and tried to make friends, but she continued to fight nightmares and flashbacks of her time during World War II.

The family’s perseverance is a classic story of the American dream, but it also illustrates the difficulties that millions of immigrants face in the aftermath of trauma.

The Light in Hidden Places by Sharon Cameron 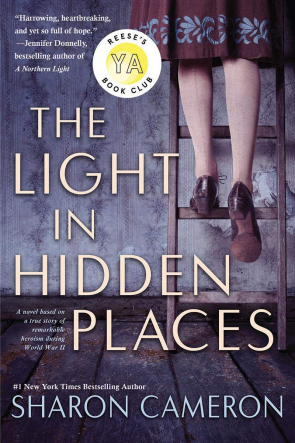 One knock at the door, and Stefania has a choice to make...

It is 1943, and for four years, sixteen-year-old Stefania has been working for the Diamant family in their grocery store in Przemysl, Poland, singing her way into their lives and hearts. She has even made a promise to one of their sons, Izio -- a betrothal they must keep secret since she is Catholic and the Diamants are Jewish.

But everything changes when the German army invades Przemysl. The Diamants are forced into the ghetto, and Stefania is alone in an occupied city, the only one left to care for Helena, her six-year-old sister. And then comes the knock at the door. Izio's brother Max has jumped from the train headed to a death camp. Stefania and Helena make the extraordinary decision to hide Max, and eventually twelve more Jews. Then they must wait, every day, for the next knock at the door, the one that will mean death. When the knock finally comes, it is two Nazi officers, requisitioning Stefania's house for the German army.

With two Nazis below, thirteen hidden Jews above, and a little sister by her side, Stefania has one more excruciating choice to make.

Her Own Two Feet by Meredith Davis & Rebeka Uwitonze 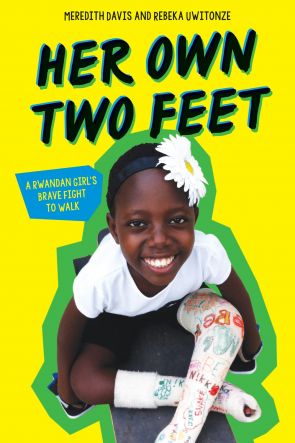 Through her eyes, the moving story of a young Rwandan girl born with clubfeet and the risk she takes for the chance to walk on the bottoms of her feet for the first time.Rebeka Uwitonze was born in Rwanda with curled and twisted feet, which meant she had to crawl or be carried to get around. At nine years old, she gets an offer that could change her life. A doctor in the US might be able to turn her feet. But it means leaving her own family behind and going to America on her own.Her Own Two Feet tells Rebeka's inspiring story through her eyes, with the help of one of her hosts. She travels from Rwanda to Austin, Texas, to join the Davis family, despite knowing almost no English. In the face of dozens of hospital visits and painful surgeries, Rebeka's incredible bravery and joyful spirit carry her to the opportunity of a lifetime. A stunning debut about hope, perseverance, and what becomes possible when you take a risk.

Girl Under a Red Moon by Da Chen 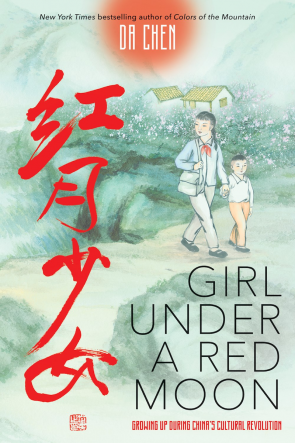 New York Times bestselling author Da Chen weaves a deeply moving account of his resolute older sister and their childhood growing up together during the Chinese Cultural Revolution.In a small village called Yellow Stone, in southeastern China, Sisi is a model sister, daughter, and student. She brews tea for her grandfather in the morning, leads recitations at school as class monitor, and helps care for her youngest brother, Da.But when students are selected during a school ceremony to join the prestigious Red Guard, Sisi is passed over. Worse, she is shamed for her family's past -- they are former landowners who have no place in the new Communist order. Her only escape is to find work at another school, bringing Da along with her. But the siblings find new threats in Bridge Town, too, and Sisi will face choices between family and nation, between safety and justice. With the tide of the Cultural Revolution rising, Sisi must decide if she will swim against the current, or get swept up in the wave.Bestselling author Da Chen paints a vivid portrait of his older sister and a land thrust into turmoil during the tumultuous Chinese Cultural Revolution.